The Age of Cryptocurrency: An Overview of Income and Sales Tax Considerations

The popularity of cryptocurrencies such as Bitcoin have provided the media and investors with much to talk about while regulators, such as the Canada Revenue Agency (CRA) have been shy on their views from a tax compliance perspective.
The purpose of this article is to bring to light the CRA’s limited views on cryptocurrencies at this time and some important items to consider from a tax perspective. This article will also touch on the mechanics of the cryptocurrency system, but should not be considered as a complete overview of the system as a whole. While a number of cryptocurrencies exist, the focus of this article will be from a Bitcoin perspective under the assumption that the tax considerations do not differ significantly from one cryptocurrency to the next. However advice from a tax professional should always be sought before making this determination.

Mechanics
Unlike cash, Bitcoin has no physical form. It’s a digital “currency”. The distinctiveness of the Bitcoin system stems from the elimination of the need for a third party such as a bank, broker, or other intermediary to administer payment. Additionally, there is no central authority controlling the supply of Bitcoin. The function of supply is administered by Bitcoin “users” and its back end software. Bitcoin units come into existence, or into possession, under three methods: (1) consideration received for the supply of goods or services, (2) purchased in exchange for traditional currencies (such as the Canadian dollar) or (3) through the concept of “mining”, which will be discussed later in this article.

The regulators
The CRA has been very clear that Bitcoin is not a currency for Canadian tax purposes, but instead a commodity. Therefore, the income and sales tax considerations on “bartering” must be followed when transacting with Bitcoin. Bartering is practised when goods or services are exchanged directly for other goods and services without using money/currency. Professionals will argue that CRA’s interpretation of “money” and “currency” are not correct in the context of Bitcoin, however this is outside the scope of this article, and ultimately for the courts to decide. Therefore based on information currently available, the following points are important to consider when transacting with Bitcoin (i.e. bartering):

The concept of mining
As mentioned above, Bitcoin can come into possession through the concept of mining. In basic terms, Bitcoin mining is the process of applying computer power to run software that solves complex mathematical problems. Upon solving these problems, miners are rewarded with Bitcoin. Miners are also compensated for processing and verifying Bitcoin transactions which mitigate the risk of theft and fraud in the system. The concept of mining is based on the fact that the supply of Bitcoin is limited. As the supply increases, the more difficult it is to mine (i.e. solve mathematical problems). Whether the concept of mining is regarded as a hobby or commercial activity is a question of fact and should be discussed with professionals. If mining is considered a commercial activity, then the normal rules surrounding inventory valuation and the concept of profit and loss will apply from an income and sales tax perspective. If mining is considered a hobby, than the activity can be considered non-taxable.

Follow up
The above is a primer on some income and sales tax considerations surrounding Bitcoin. If you are transacting with Bitcoin please do not hesitate to contact us for any questions or concerns you may have.
Posted by McIntyre and Associates at 10:09 No comments:

Finance revisits tax reform proposals: Where are we now?

October 2, 2017 marked the end of the Liberal government's 75-day consultation period on proposed tax reform for private corporations. The reaction to this proposal was swift and may have caught the Liberals off guard. That's why it's not surprising that changes to the tax reform plan were announced only two weeks after receiving some 21,000 submissions!

We thought it would be useful to outline what has changed since the proposal was originally unveiled in July.

Income sprinkling
The Government is moving forward with limitations on income sprinkling through dividends to family
members. However, the Government has emphasized that a family member who makes a meaningful contribution will still be entitled to receive a reasonable amount through dividends. "Meaningful contribution" and "reasonable amount" have yet to be defined. We expect that the specifics will be determined by future CRA interpretations, and ultimately the courts.

Passive income investments within the private corporation
One of the most contentious changes was the intent to heavily tax passive income earned in a corporation on a go forward basis. The proposal was to grandfather in any existing surplus and tax any new surplus earned from active businesses invested in the corporation with an additional 38.3%. (This was handled by limiting the refundable tax when paid out as a dividend). The intent of this change was to eliminate any tax deferral advantage that came with investing in a corporation.

The Government determined that instead, there would be a safe harbour for the first $50,000 of investment income. This means that the proposed additional 38.3% tax would not apply to the first $50,000 of income in the corporation earned from investment income. This amount was chosen because it was determined to be equivalent to $1,000,000 invested, earning 5% interest annually. They will continue to grandfather existing investments.

What remains unclear is when the date of this change will take effect. Also not clear is how the $50,000 will be calculated. For example, capital gains have a 50% inclusion rate for income tax purposes, but does that imply you can earn $100,000 in capital gains as it is only $50,000 of income?

Regardless, now more than ever, it will be important for investment advisors and accountants to
communicate with respect to planning.

Conclusion
These changes have created an environment with a large degree of uncertainty. We anticipate more
changes are coming. Should you want to discuss your situation and how the above may impact you or your business, please contact us to arrange a meeting.

Posted by McIntyre and Associates at 11:01 No comments:

The traditional system of accounting involved software installed on a desktop or laptop with little to no remote access or integration. The new trend is a shift away from the one station operation to an online portal that is accessible from anywhere. The internet-based application provides vital information from virtually anywhere and can be integrated with various modules such as payroll, invoicing and budgeting. Typical features of these new systems include:


There are some drawbacks to the system as well, such as reliance on the third party provider to maintain your records. Depending on the provider, the data could be stored outside of the country and subject to foreign laws with regards to security and privacy. Another issue is the ability to access the information. The data is hosted online and therefore the Internet connection has to be of sufficient speed and reliability to ensure that the application is used smoothly. There is definitely some benefits to using cloud-based accounting however you have to ensure that the setup will meet your needs adequately.

Posted by McIntyre and Associates at 08:22 No comments:

One of the ways for a taxpayer to become compliant with something that was amiss in the prior period(s) is the voluntary disclosure program. It allows the taxpayer to file the additional documentation required without the application of penalties. The tax liability and interest will still apply however potentially onerous penalties are avoided. The voluntary disclosure is an all-in kind of program where the taxpayer discloses the information and leaves it up to the Minister’s discretion to waive the penalties.

What happens if the submission is not eligible?

The taxpayer handed over the documentation to assess the additional tax and for whatever reason is not eligible for relief. In that case, the taxpayer has handed over the loaded gun to the agency in whose capacity it is to apply tax, interest and penalties as well as begin collection efforts upon completion of the assessment. When applying under this program the taxpayer either has to be really certain that he or she qualifies or they could pursue a no-name disclosure.

A no-name disclosure does not specifically identify the taxpayer but still identifies the situation. It is basically a question asked of the Minister “if someone were to be in this situation and provided this documentation, would they be eligible to apply for the program”. The response would be limited to the facts disclosed. If there were additional information that was not provided in the no-name disclosure then the Minister is not bound by its original answer and could change its decision. There is also a time limit (90 days from the day of the mailing of the response) to submit the full disclosure if the taxpayer wishes to rely on the response provided. There are some facts required to be identified about the taxpayer so that if the voluntary disclosure is pursued, the response to the no-name disclosure could be matched with the subsequent submission of the full disclosure.

Overall a no-name disclosure is a good way to test the waters to ensure that once all of the information is provided, the taxpayer is eligible for the waiver of penalties.
Posted by McIntyre and Associates at 12:03 No comments:

Don't let it sneak up on you! 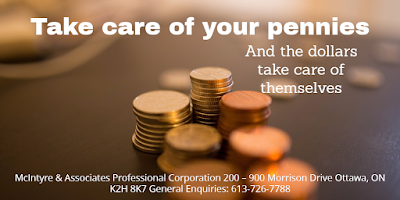 protect our ghouls, ghosts, and goblins

Please be careful on Monday October the 31st.

Posted by McIntyre and Associates at 08:59 No comments: